Welcome to part three of my interview with David Atkinson! Part two went terribly, so we scrapped it and decided to start again, and it went much better this time. Thank goodness for that. David is the author of Not Quite So Stories, a new short story collection from Literary Wanderlust that will be published on March 1st. I've read it already and it is terrific. On to the interview!(Part one can be found here.) 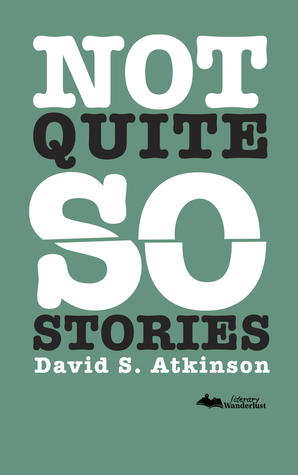 Jeremy: If you couldn’t be trapped in a Village Inn, where would you be trapped?

David: For those who have read or seen S.F.W., I'd have to throw a Fun-Stop out there. Nah, not really. If I had a choice, I'd rather not be trapped at all. We're all trapped somewhere though. If there isn't a choice, hopefully it has pancakes, comfy places to sit, and bathrooms.

Jeremy: Bathrooms are good. In the story “Domestic Ties,” there was an interesting idea put forth that caused me to have deep thoughts. Do you think that forcing residents to house excess prisoners would force all of us to take a deeper dive into the Military-Industrial-Prison complex? Or would we all feel emboldened by the knowledge that we are “doing our part?”

David: This story actually came out of an old SNL skit from the seventies I remembered watching. At least, I remember it being SNL. From my guess, I'm not thinking we'd get much more insight into the authoritarian structures of our society or feel very duty emboldened for very long. Maybe I'm a little cynical, but I think the thing that would happen fastest is a blurring of those lines we draw in society and confusion of the roles interrelated there between. Humans don't appear to handle sustained conceptual shakeup well, me being no different.

Jeremy: As a writer, what is the worst thing you can do?

David: I try not to think about this. People love a challenge (the behavior between the husband and wife in "A Brief Account of the Great Toilet Paper War of 2012" coming to mind) and I'm sure someone would get the urge to try to top anything I came up with. I just don't want to be responsible for spawning something like that. Better to not give anyone any incentive to go further.

Jeremy: Paper, plastic, or should we carry our groceries from our car to our house with our own two hands, the way God intended?

David: Personally, I'm not satisfied with the Biblical inconsistencies between the advocacy of paper in Isaiah, the declaration of holiness of plastic in the Psalms, and the insistence that anyone who doesn't carry their groceries by hand is going to Hell as stated in the apocryphal Book of Maccabees. I think we all have to answer this question for ourselves. If you want to be like Nan in "The Onion She Carried," go for it. I'll try to refrain from judging.

Jeremy: You’ve lived in Nebraska and now live in Colorado. Did you see any validity to the idea that northern Colorado would form a new state with western Nebraska?

David: Like the French hotel owner in "Changes for the Château," I try to avoid most change if I can because I've barely got a grip on my life now and any kind of change is more to try to handle. Beyond that, I think we should consider the wise words of Grandpa Simpson:
Grampa: [writing a letter] Dear Mr. President, there are too many states these days. Please eliminate three. I am NOT a crackpot.

Jeremy: I think Grampa was on to something. If such a state was formed, the motto would clearly be “Nothing to See Here,” right?

David: Omaha (The Movie) might disagree with that. After all, Carhenge is out by Alliance. One of the central themes running throughout this collection is that there is something to see everywhere, even in northern Colorado and western Nebraska. We just often stop being able to look.

Jeremy: Peyton Manning did a great job directing that film. Moving on, you put forth a strong case for how toilet paper should be placed in the holder in “A Brief Account of the Toilet Paper War of 2012.” Is this an issue you are passionate about?

David: This story actually grew out of a fight my wife and I have about toilet paper. I'm a strict "over the roll" adherent. My wife, on the other hand, frequently runs out a roll and leaves it that way. She's doubtlessly going to be damned in the afterlife, but I proselytize regularly in an effort to save her soul.

Jeremy: With my last book, someone on Amazon said that they placed it in the recyclable bin. Can Not Quite So Stories be recycled? How is it in a compost pile?

David: The electronic version is highly recyclable. Rearranging the bits, one can form a variety of different digital works. Those ones and zeroes can be reused indefinitely. Of course, this doesn't apply to digital copies in the UK. They've got laws there about that and I think new works can only contain as much as 85% postconsumer recycled bits without having to be labeled as used. On an unrelated note, I think "compost" would have been an acceptable alternative name for email. You know, "com" short for computer or communication network and "post" short for post office or postal service.

Jeremy: It is truly refreshing to see someone so committed to being green, particularly in the neglected area of digital recycling. Well done. Any last thoughts you’d like to offer? Or if you haven’t thought about your answers before this, perhaps you’d like to try it for this final question?

David: I'm suddenly remembering an old Pogo comic that had a couple politician caricature animals trying to deal with a populace-monitoring computer that kept exploding. One said something to the other and followed that up with: "Don't you think?" The other ignored the first part and responded only to the second by saying: "Every Saturday, need it or not." I'll go with that here, and as a general commentary on this entire book.
Posted by Jeremy Morong at 11:39 PM

Email ThisBlogThis!Share to TwitterShare to FacebookShare to Pinterest
Labels: interviews